The first site that we have chosen to be featured as part of the Detroit Mobile Audio Tour will be Eastern Market.  Over half of you who came to our site poll  voted for Eastern Market among your top picks.  Now we’re looking for you to help us get Eastern Market’s back-story right. 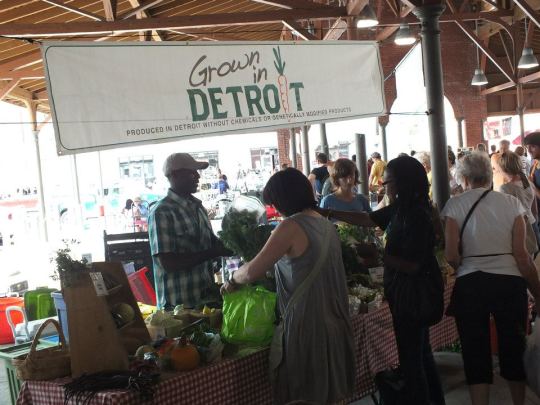 On Monday, August 27th, we’re collaborating with WDET 101.9 FM’s Question of the Day to ask, “What under the radar information do you think people should know about Eastern Market?”

But really, all week long we want to hear from you.  We want you to answer any or all of the following prompts:

-What memories do you have of going to the Eastern Market?

-How do you currently interact with Eastern Market?

-How does the Eastern Market represent how Detroit was, how it is today, and how it might be in the future?

-What under the radar information do you think people should know about Eastern Market?

Leave us a voicemail

Call (951) 262-3438 to leave us a voicemail.  It’s just a weird area code because we got the number on the internet.  There is no fee for you to call and it should just take you a second to leave your message.

Take a quick second to set up a free SoundCloud account, then come back to here and click on this link.  Make sure you have the most recent Flash and that you enable your computer’s microphone when prompted.  Press the ‘Record’ button and respond to one or more of our prompts.  If you don’t like your recording, you’ll have a chance to redo it as many times as you need.  Once satisfied, upload your response on the following page: http://soundcloud.com/groups/tell-us-about-eastern-market/dropbox

Sometimes its easier to record using the SoundCloud App on a ‘Smart phone,’ than it is to record on a computer.  If you haven’t already, you must first download the SoundCloud App onto your phone.  It’s free and worth it.  Then open up the App and click on the orange “REC” circle on the bottom menu bar.  Hit the orange “REC” button that pops up in the middle on your screen to start recording.  To stop recording, press it again.  If you don’t like what you’ve recorded, press “Reset” and try it again.  Once satisfied, press “Save.”

Now you might actually want to log in to SoundCloud on a computer.  Then come back to this page and click on this link.  Once there, click on the blue link underneath the “Choose File” button that says, “Select an Already Uploaded File.”  A list of files you’ve already uploaded to SoundCloud will pop up.  Find the one you just recorded on your App.

Should be self explanatory.

Posted by lauraherberg in Uncategorized

By emailing us at listentodetroit@gmail.com